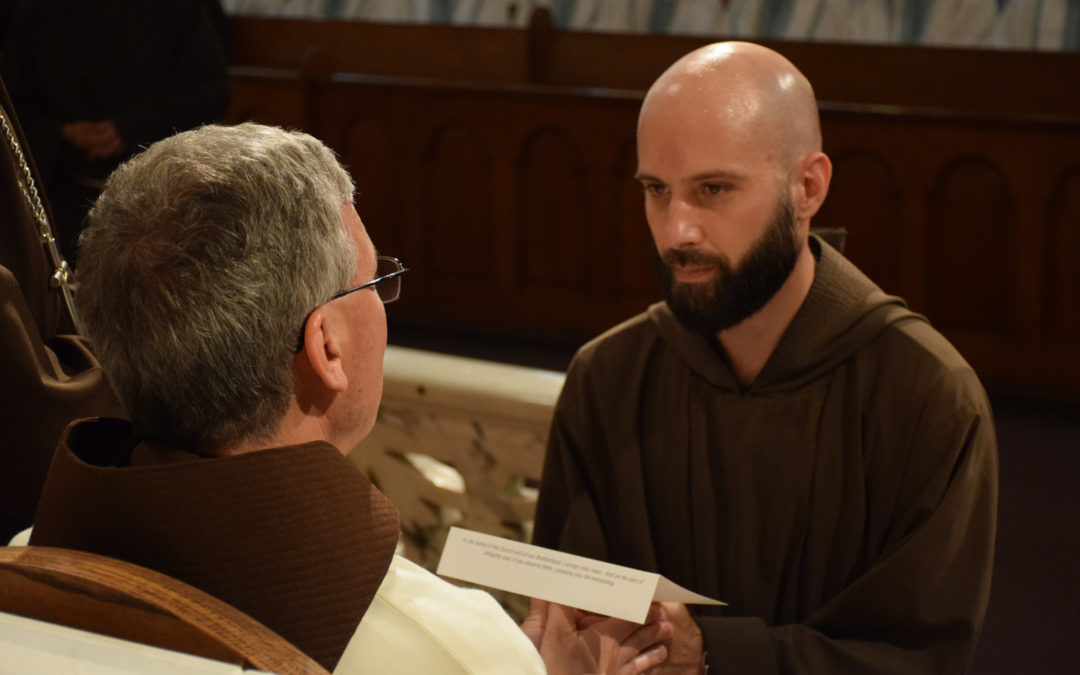 Web Editor’s Note: This story references three young friars who made profession to the Capuchin Order last summer.  Sadly, one of the trio, Bro. Saúl Soriano died May 7, 2018.  He was preparing for his examination for ordination as a deacon and the completion of his theological studies in the fall.

After years of soul-searching and discernment, three young friars went against almost every trend in modern culture. Leading up to that decisive day, each man understood the powerful appeal of marriage and family life. They considered the attraction of ownership and accumulation of material wealth. Each weighed the option to reserve their right to make their own choices in life. In the moments before they promised a life of chastity, poverty, and obedience, Bros. Diogo Escudero, Keon Tu, and Saúl Soriano lay prostrate on the floor of the church, imploring all the saints to pray for them in this incredible moment.

With more than 100 brother Capuchins and a capacity gathering of family and friends praying with them, the trio rose to their feet with confidence that God would strengthen them for the journey ahead. One by one, they knelt and promised to live as Capuchin friars for the rest of their lives. It was their day to make solemn profession as Capuchin friars. Bro. Diogo was born in Brazil and lived many years in Florida, attaining a degree in microbiology. His Master’s thesis considered a hidden dynamic of cancer cells. A prosperous future was ahead of him.

But something had always tugged at his heart – the Lord wanted even more for him. Bro. Diogo began to hear God call him to Capuchin life.

Born in China, Bro. Keon fled to the United States and established his residence in Philadelphia. A committed Presbyterian, he became pastor of a church. He had wondered about the Catholic faith. Pastor Keon occasionally attended Mass at the Capuchin parish of St. John the Evangelist in Center City Philadelphia. It became clear to Keon that he had to become a Catholic, leaving behind his congregation and perhaps some good will. He was received into the Catholic Church and immediately became a lay missionary in Papua New Guinea. After two years in the missions, Keon returned to the United States and decided to explore the possibility of life as a Capuchin friar.

Bro. Saúl began his life in Central America. Together with his family, he escaped the gangs and violence of the war-torn nation of El Salvador, winding up in northern Virginia. His family, along with many other Latinos, became parishioners of the Capuchin-run parish of the Shrine of the Sacred Heart in Washington, DC.

After high school, Saúl was accepted into the Capuchin formation program at Borromeo Seminary in Wickliffe, OH. He was on his way to being a Capuchin friar.

The three perpetually professed brothers are finishing theological studies at Catholic University of America in Washington, DC. They are solid, faithful and happy Capuchin friars who will serve God’s people with enthusiasm and great zeal.